Skip to content
King’s Road in the Borough of Chelsea is an affluent, sophisticated and tranquil area. Anything out of the ordinary can be quite rare for this manor, so when Kurobuta came onto the scene, people were mesmerised and captivated by this bizarre phenomenon.
Kurobuta, offering Japanese fare, is distinctive compared to the archetypal Japanese restaurant. The design and atmosphere of the venue is sensationally boisterous with a trendy, indie, hipster vibe that has a sprinkling of funk, rock and roll and heavy metal thrown into the mix to dazzle the senses. This Japanese eatery is outlandish, bold and typifies the “izakaya” method of dining, which is fundamentally a gastropub/tavern, offering small tapas style dishes for sharing. Even though izakaya eateries are ubiquitous in Japan, they are still uncommon elsewhere in the world, which makes Kurobuta a unique dining experience, especially for the Muslim community. 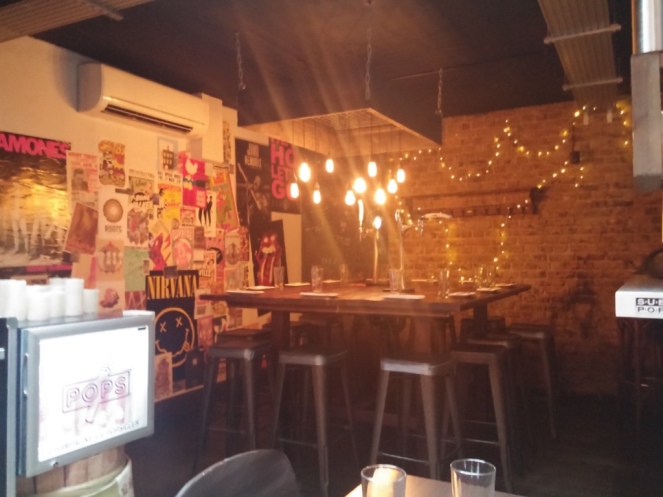 We began our Far East odyssey from the “Raw/Salad” section of the menu by ordering “Beef Fillet Tataki with Onion Ponzu & Garlic Crisps”. The Beef fillet was nothing short of sumptuous. The seared beef was exquisitely well seasoned to provide bold umami flavours, with the tangy ponzu sauce adding further pleasure to the tastebuds. Visually stunning and gastronomically thrilling.

From the “Robata” section, we opted for the “Miso Grilled Baby Chicken with Spicy Lemon Garlic Sauce”, “Tea Smoked Lamb with Smokey Nasu & Spicy Korean Miso” and “Free Range Chicken Kushi-Yaki with Japanese BBQ Sauce”.
Miso Grilled Baby Chicken was succulent and moist in texture, with the miso infused chargrilled exterior providing a divine caramelized smoky taste. The spicy lemon sauce lacked the element of spice, but was gloriously rich in flavour and a great accompaniment to the baby chicken.

The lure of the Tea Smoked Lamb was difficult to resist. The lamb cutlet was texturally nothing short of perfection; succulent, luscious and tongue tinglingly tender. The subtle flavour of the smokey wood chip infused with matcha tea provided a remarkable taste, which was further enhanced by the spicy miso sauce, that provided a gentle kick, which was subdued by the smokey, earthy aubergine. This is a must try dish. 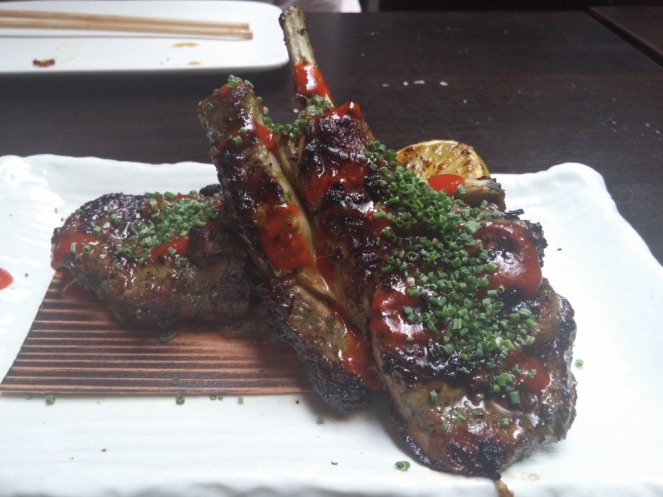 The Free Range Chicken Kushi-Yaki  was another astounding dish. The skewers of chicken thigh meat were supple, tender and sensually moist. The chicken had a smokey grilled flavour combined with the rich, sweet BBQ sauce that made the tastebuds dance with gratification.

From the “Junk Food Japan” section, we succumbed to the “Beef Sliders; Steamed Buns, Crunchy Onions, Pickled Cucumber and Umami Mayo” and “Tuna Sashimi Pizza with Truffle Ponzu and Wasabi Tobiko”.
The Beef Sliders were dainty, bijou and scandalously minuscule in size, but packed full of flavour. The Wagyu beef was scintillating delicious, juicy in texture, wonderfully seasoned and lightly spiced. The soft sweet bao buns were also delectable and married well with the savoury beef. However, personally we would have liked a larger helping of mayo, the pickled cucumber lacked presence and of course, the size is definitely not substantial enough to satisfy our ravenous appetite. Nonetheless, another superlative dish.

Tuna Sashimi Pizza was a revelation. The base was crunchy, and tasted like fried tortilla, which contrasted well with the fresh, meaty, yet light tuna. The sauce was tangy and the wasabi fish eggs exploded in the mouth like popping candy, releasing concentrated liquid of ecstasy.

From the “Something Crunchy” portion of the menu, we opted for the “Jerusalem Artichoke Chopsticks with Truffle Ponzu Dip”. The truffle dip was rich and tangy in piquancy and made the tastebuds tingle with desire, the artichoke chopsticks were wholesome, moreish and seasoned well.

From the “Significant Others” section the “Kombu Roasted Chilean Seabass with Spicy Shiso Ponzu” peaked our interest. The portion of the seabass was underwhelming, yet the fish was prepared impeccably. The white flakes of fish were meaty and tender, the skin was roasted and crusty; providing a welcoming texture combination. However, the flavours were too subtle and required greater depth of seasoning and spice to lift the dish.

It would be recusant to dine at a Japanese restaurant without sampling the “Maki” dishes. The two dishes that caught our attention were the “Salmon Gravadlax & Avocado Maki with Dill Mayo” and “Shrimp Tempura Dragon Maki with Unagi Sauce and Soba Crunchies”. Both the Maki dishes exhibited freshness and the combination of ingredients were joyfully pleasant, but neither were overwhelmingly outstanding.
Finally from the “KB Chelsea Specials” segment we sampled the “Pumpkin Tempura with Creamy Spicy Shiso Dip”, which was surprisingly appetising. Looking and tasting mildly similar to Wotsits, these were an unexpected joy. Furthermore the spicy dip was salaciously good and both combined were addictive. 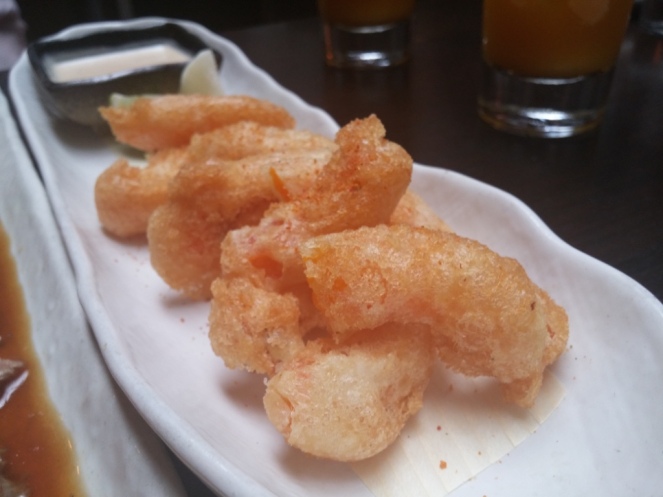 For dessert, from their “Bottomless Brunch” menu we were presented with blood orange sorbet, yuzu, mango and coconut mochi ice cream, chocolate fudge and pistachio cake. The combination of textures and flavours were euphoric. The dessert was both a palate cleanser and a decadent dessert love affair, and a blissful way to end our Japanese exotic adventure. 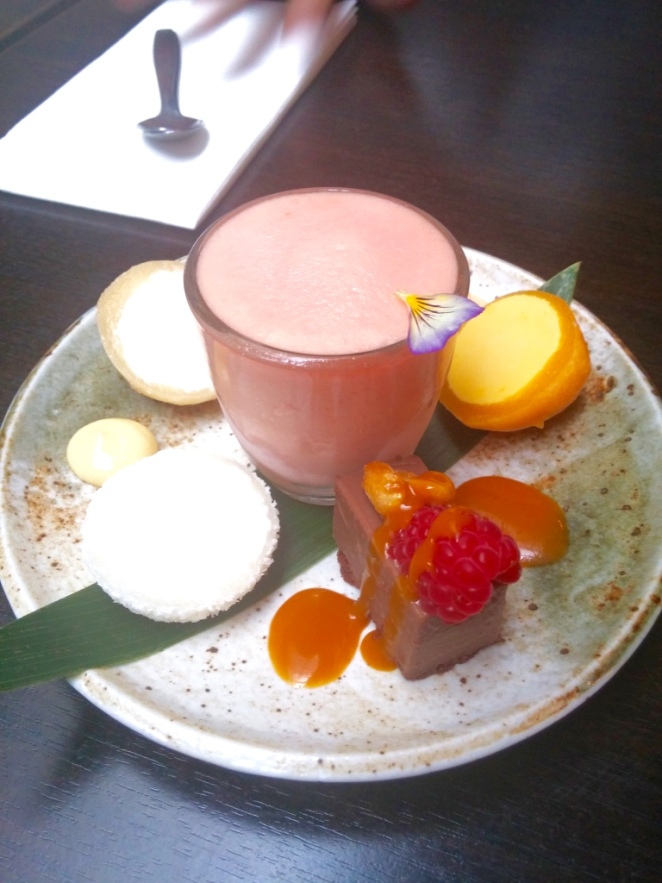 Kurobuta is audaciously unorthodox, taking classical and traditional Japanese cuisine and infusing it with swagger, swank and bodaciousness.
There were some dishes that did not entirely meet our expectations and the price tag would most likely make a grown man weep, however, the majority of the food that we sampled were presented exquisitely and had some phenomenal flavour combinations that  not only gratified our passion for food but also made our soul sing jubilantly.
Kurobuta is indubitably a unique Halal dining experience, as the setting holds no airs or graces, the atmosphere encourages groups to come together and rejoice by sharing some culinary delights and best of all, you’ll go home at the end of the day/night feeling modish and cool, along with, most probably a lighter wallet.
*Disclaimer: Halal meat has to be pre-ordered. We were invited to review the restaurant.