Once in a while you encounter a restaurant that not only redefines your preconceptions but also reignites that burning passion to be a food bon vivant; and Rudie’s is one such restaurant.

The evolution of the halal food landscape has offered Muslim diners the opportunity to finally enjoy a myriad of cuisines in elegant surroundings that were once a utopic fantasy. However, there are still certain cuisines such as Jamaican fare where halal options are not readily available and the limited number of halal options are predominantly found in a takeaway setting. That was the preconception, until Rudie’s appeared on the scene, transforming archetypal Jamaican rustic dishes into haute cuisine, while catering for the Muslim dietary requirement.

Rudie’s, located in the urban, hipster foodie Mecca of Stoke Newington, specialises in Jamaican classics. The decor is modern and smart, with elegant subtle colours paying homage to its Caribbean roots. The venue has a Parisian bistro feel to it, yet the sensation that you have entered into a West Indian oasis is difficult to dismiss, when being surrounded by large light furnishings that resemble palm trees, along with reggae, calypso and mento tunes resonating in the background. 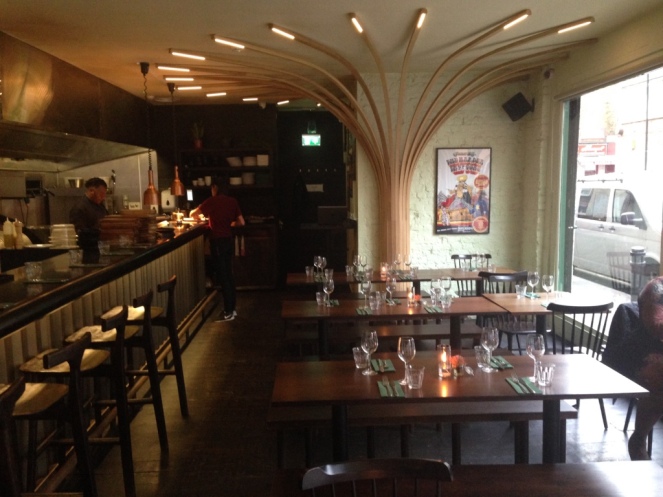 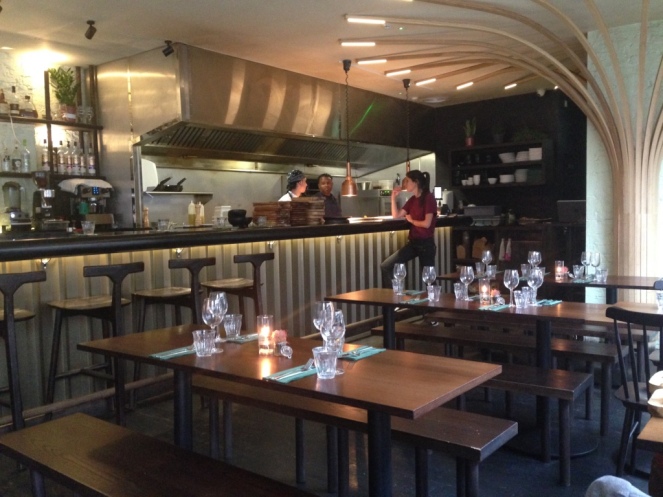 Please note that the food depicted in the pictures are sample size and not the true portion size, unless otherwise stated in the review. Lamb, beef and chicken is halal, however, alcohol and pork is also served on the premises, but are stored and prepared separately.

From the “Small Plates” section we sampled the “Boston Wings”, which are deep fried wings in a hot glaze. The wings delivered a gloriously spicy kick, yet still exuded bold and bountiful flavours that tantalised the tastebuds. A truly magnificent dish. 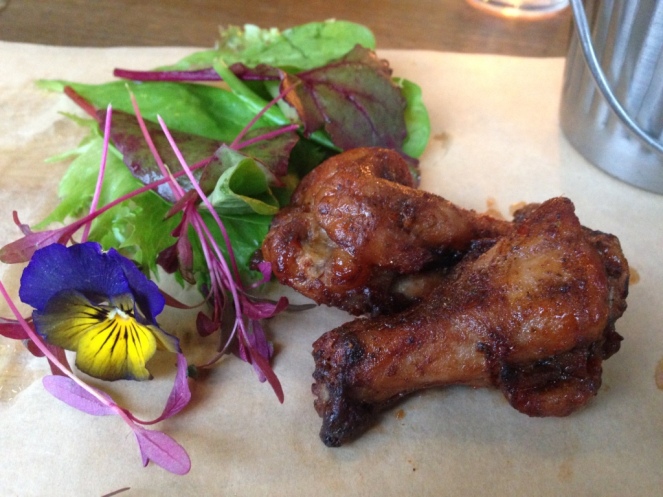 The traditional “Ackee & Saltfish Bake” contained ackee, peepers, mild chilli, salted cod, sandwiched between two Caribbean bake baps. The ackee had a marvellous egg like texture, with the sweet peppers balancing perfectly with the salty cod. The flavours were once again bold and prominent. However, the unexpected hero of this dish was the bake baps, which were soft, doughy, light and had a taste that was very similar to a buttery parata; Indian bread. The combination of flavours and textures were nothing short of divine.

The “Peppa Shrimp” were broiled king prawns served with a spicy scotch bonnet pepper sauce. This was a sensational dish and a must try. The aroma from the scotch bonnet, was sweet and fiery, setting my nasal hairs on fire. The heat from the chilli was pure molten lava, igniting an inferno in my mouth, which was so addictive that like a sadist, I yearned for more; as the heat from the scorchingly, sweet yellow scotch bonnet was gloriously laced with ethereal flavours.

From “Rudie’s Real Jerk” section we sampled the “Lamb Rump”, which was marinated in jerk seasoning for 24 hours and cooked over charcoal and woodsmoke. The lamb, prepared medium was tender and succulent, with a delectably charred outer layer. The lamb had a sumptuously smokey and moreishly mild jerk piquancy, which was further enhanced with a choice of papaya, banana pepper and jerk ketchup sauces. This was once again another sensational dish that seduces the palate to ecstasy.

The “Jumbo Shrimps” were the next dish to be sampled, which were grilled prawns, with avocado salad and lime and coriander dip. This is a suitable dish for people who are spice aversed. The prawns were cooked perfectly, as they were tender, yet firm and had a subtle garlicky and olive oil marinade. The avocado was smooth and buttery, the salad was refreshing, with a bite of acidity from the onions and the dip was zesty and herby. The festival, which is the protruding breadstick, had a slight sweet piquancy and added a contrasting texture to the seafood dish. 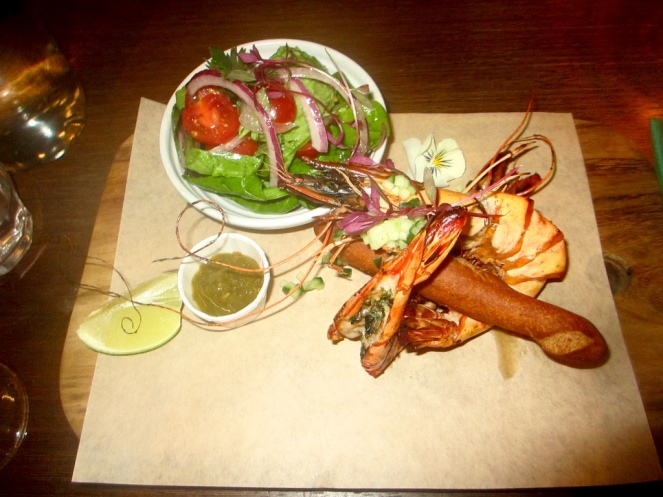 From the “Yard Classic” the special of the day was “Goat Curry”. The meat was extremely tender, juicy and succulent, and as it was still on the bone, it was fortified in flavour. The curry itself was mildly spiced and slightly oily. We would have preferred a bit more heat in the dish and of course less oil. However, the sweet carrots and the rice and beans were once again a sublime combination. 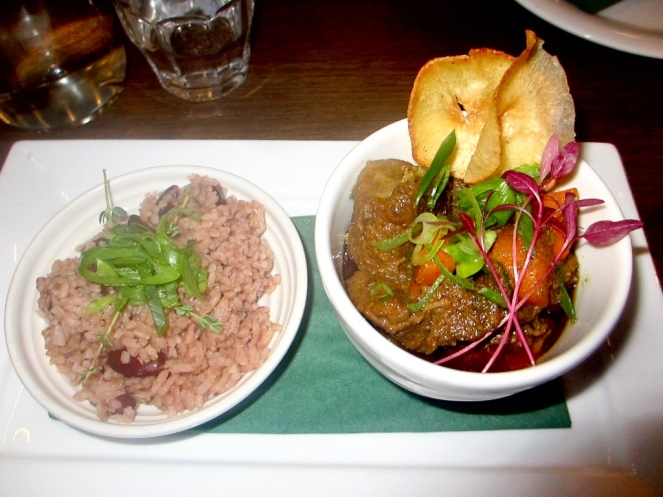 The final dish that was presented to us was the “Jerk Cheeseburger” accompanied with “Red Cabbage Slaw” and “Fried Plantain”, which was served in its true portion size. The patty was prepared medium, so was tender and moist in texture, which was excellent. In terms of seasoning, unfortunately it lacked salt and the jerk seasoning was not consistent, so the flavours were disappointingly weak. The burger had great potential but was unsuccessful on its execution on this occasion. However, the red cabbage slaw was phenomenal as it was creamy and sweet with a tangy caress that made the mouth tingle with delight. The plantain chips were fried plantain with minimal seasoning and not very exciting.

To end our Jamaican food odyssey, from the “Dessert” section, we were offered the “Banana Brûlée”. I have never been a fan of creme brûlée, the texture and the taste have never appealed to me. But the Banana Brûlée took me by surprise. The caramelised, toffee topping was strikingly delicious and the banana was subtle yet piquantly exquisite. 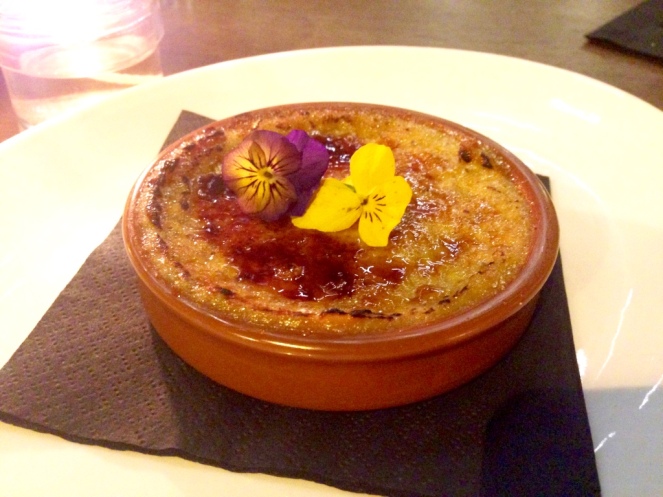 Rudie’s, sounding like a rude boy Rastafarian restaurant is anything but. Rudie’s will make you reevaluate your expectations of Jamaican food.

Jamaican dishes have always been renowned for their wonderfully striking and captivating flavours, but Rudie’s finally offers it in a contemporary setting and for the halal palate. The presentation of the food is refined and eloquent, the atmosphere is jubilant and enticing, the dishes are uncompromised and the whole experience is simply unforgettable.

*Disclamier: We were invited to review the restaurant.

There was an error retrieving images from Instagram. An attempt will be remade in a few minutes.