Asta Luego’s is an American inspired burger diner in North Wembley, with the name appearing to be a play on word for the Spanish phrase “Hasta Luego”, which worryingly  means “bye” but fortunately also means “see you later”, which we presume is the owner’s intention. In terms of the food, no real Spanish influence, so the name is a bit of an oddity.

The interior is a mixture of pop art and graphic design, with bold and audaciously gaudy colours such as gold, along with black and white stripes, which are quite hypnotising. The decor is indubitably bold, funky and hip, and you feel as though you’ve entered into a graphic novel, yet some aspects of the furnishing seem like the decorator was a bit over zealous and capitalised on a bric-a-brac sale. 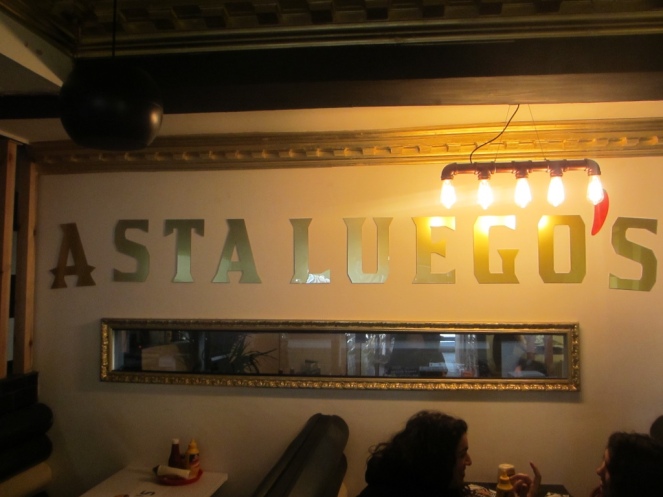 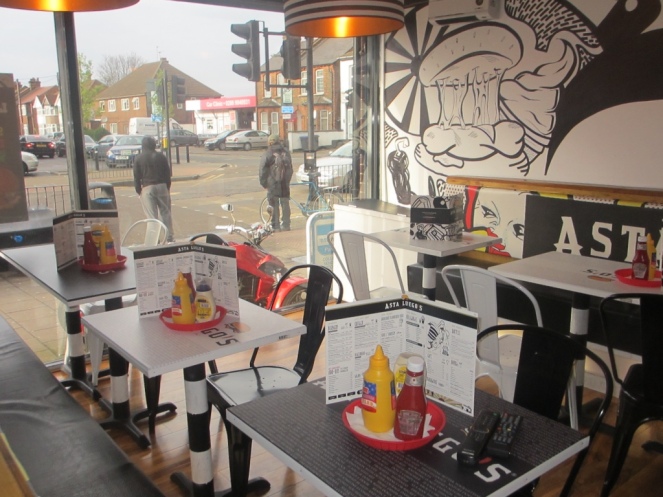 Our invitation to Asta Luego’s started with the “Asta Luego’s Mojito” and “Reece’s Buttercups Milkshake”.

The Mojito was exceptional, with the sweetness from the brown sugar cutting through the sharp, sour and zesty flavour of the lime juice, in addition to the mint making the mocktail fresh and vibrant in taste. A truly accomplished mocktail.

The milkshake was of good consistency and texture, thick and frothy, yet liquid enough to be thirst quenching. However, in terms of piquancy, it tasted like a chocolate milkshake, with no hint of peanut butter or Reece’s chocolate. The milkshake was undeniably good, but the taste was void of Reece’s Buttercup, which was a great disappointment.

For starters we opted for the, “Taco Fries”, “Chicken Wings” and “Lamb Chops”.

The Taco Fries arrived with an exquisite aroma, instantly making our mouths salivate with anticipation. The acidic crunchy sweet red onions and fiery jalapeño, combined with the fluffy potato chips and smooth cheese, while being smothered in a light tomato based sauce with a hint of spice running through it was gloriously gratifying in taste, as each bite lit a firework of flavours. However, a key component, the mince meat was non-existent and therefore disappointment once again ensued, as the dish potentially had the calibre to be outstanding, instead of being just good.

The Chicken Wings in texture were moist, succulent and tender with a spicy masala sauce marinade, which was truly delectable. The taste was irrefutably enjoyable, but slightly confusing as it was not consistent with the theme of an American inspired burger diner, which perplexingly has a Spanish name. Nonetheless, the chicken wings is a dish that we would recommend, especially if you enjoy spicy masala.

The Lamb Chops were also infused with the masala marinade and were meaty and pleasant in flavour. However, the chops were slightly over cooked, so were not as succulent as they could be and the marinade needed to be bolder. If the chops were marinaded in a dry spice rub, then the flavours would be prominent and the chops moist and tender. Nonetheless, the chops still offered an enjoyable dining experience.

From the burger section of the menu, we ordered the “Asta BBQ Buffalo Burger”, “The American” and “Asta Signature Burger”.

The Asta BBQ Buffalo Burger was possibly our favourite out of the burgers we ordered. The smoky turkey bacon was meaty and flavoursome, the cheese was smooth and gooey, and the BBQ sauce had the correct level of sweetness. However, the beef patty was unfortunately cooked well-done, so the meat was regrettably firm and stodgy; whereas a patty cooked to medium, in our opinion, would be succulent and juicy in texture. Furthermore, there was minimal seasoning in the patty and a slice of tomato that was so chunky, that it was diffusing the flavours in the burger. Nonetheless, with its flaws, the burger was still hearty and flavoursome, which is a true testament to the combination of condiments that were used to create the burger, which brought it to life. The brioche bun was also a success; lightly toasted, fluffy and firm, and retaining the integrity of the burger with ease.

The American also suffered from the same deficiencies as the Asta BBQ Buffalo Burger, with the patty having minimal seasoning and cooked well-done. The fried egg was also over cooked, so the yolk had turned hard and certain parts of the egg whites had turned crispy. Personally I would have adored a runny egg yolk, with the egg being seasoned with cracked black pepper. But once again, with these flaws, the burger still delivered on taste, with the American mustard, which I tend to find unappealing, tasting subtly sweet and truly divine, and the smokey turkey bacon, again invigorating the burger with a delectable umami taste that made the burger a joy to devour.

The final burger we sampled was the Asta Signature Burger, with an extra beef patty. The double patty was not a wise move, as the burger arrived looking like the Leaning Tower of Pisa, which made attacking the burger with my mouth nigh on impossible. The burger similarly had the same imperfections as the previous burgers we ordered and the double patty also meant that the flavours were being stunted. We then took the extra patty out, and straight away, the piquancy of the smooth cream cheese, smokey candied bacon and subtle hint of the sweet chilli sauce was unleashed, transforming it into a satisfying burger.

When halal gourmet burger restaurants first started appearing in the capital a few years ago, the Muslim Community were finally offered what we had been yearning for, for what felt like an eternity. However, due to the saturation in the market, there is a requirement for these Burger institutions to offer the consumer something that will peak our interest and ensure repeat business.

Asta Luego’s quality of food and service does require amelioration. There are key elements on which they are performing undeniably well, but are just coming short at the last hurdle. Nonetheless, for the price to food ratio, Asta Luego’s offers a satisfying dining experience that will leave you saying “hasta la vista, baby”!

Follow Asta Luego’s Halal Food Journey for a satisfying and hearty burger experience that will not violate your wallet.

*We were invited to review.