Meat House London is an American inspired restaurant offering a full halal menu; serving gourmet burgers to steaks, to satisfy the prodigious carnivores in us, with a few seafood and vegetarian options thrown in to delight the herbivores and pescatarians.

Meat House London, located in Kings Cross, has an old meets new decor. The restaurant initially looks like a tavern due to its open brick listed grade 2 walls, but the interior design and furnishing is modern, with its plush brown leather seating and wooden tables enhancing the meat theme.

Our invitation to Meat House London began with a selection of mocktails.

From left to right, we sampled the “Passion Fruit Spritzer” which was bold, frothy, bubbly, sweet, lip-smackingly tart and thoroughly refreshing.

The “Raspberry Soda” was exquisite and what a true cocktail should taste like. The berry syrup flavour was prominently delicious, as it was strong, sweet, sharp and zesty in taste, both refreshing and thirst quenching; a mocktail definitely worth ordering.

The “Bananarama” was once again audaciously prevalent in flavour, tangy and fresh, but to my palate, I also got a distinctive taste of cinnamon, which even though it was not unpleasant, it was not too pleasing to my tastebuds either.

The “Morning After” was the least favourite of the quadruplets, as the flavour, unlike the other three was too mellow, and tasted too much like watered down coconut juice.

Nonetheless, almost all of these mocktails were impressive, which is largely thanks to the restaurant’s resident mixologist.

From the steak menu our gluttonous desire enticed us into ordering the pièce de résistance, the 17 ounce “Tomahawk”. The Tomahawk, named because it allegedly resembles the Tomahawk axe, is an on-the bone rib steak and has quite a large amount of inter-muscular fat, which gives it bold flavours when cooked, as the flavours are released from both the bone and inter-muscular fat to give a sweet marbled piquancy.

Its extremely difficult to find halal Tomahawk steaks in London resturants, so we were both excited and intrigued to experience Meat House London’s offering.

The Tomahawk was instantly visually impressive, closely followed by the hypnotising aroma of the subtle marinade and grill, which made the mouth salivate with anticipation. We ordered the steak to be prepared medium, as we believed the chef may fail to prepare it medium rare, as so many chefs tend to do at an Asian owned establishment. As I put my knife through the steak, the meat cut open effortlessly and I was gifted with the sight of tender pink meat. The Chef had prepared it medium rare to my jubilation. The outer layer of the steak was chargrilled to perfection and was infused with bold flavours from the marinade, the grill, the bone and the fat from the steak. The meat was succulent, juicy and tender and dissolved smoothly in the mouth. The marbling of the fat and the bone made the steak buttery and rich in flavour and texture. The subtle marinade, which was infused with Asian spices, made my tastebud dance with delight. In my opinion, this was a very accomplished steak and a joy to eat, definitely a dish that we would recommend. The sweet potato fries and the grilled vegetables were seasoned well and were a good accompaniment to the steak. The Mushroom sauce, was rich, creamy and packed full of flavour, truly delectable. The Peppercorn sauce, which I am usually not much of a fan of, was surprisingly delicious, as the peppercorn was not too pungent in taste and had a delightfully spiced piquancy. 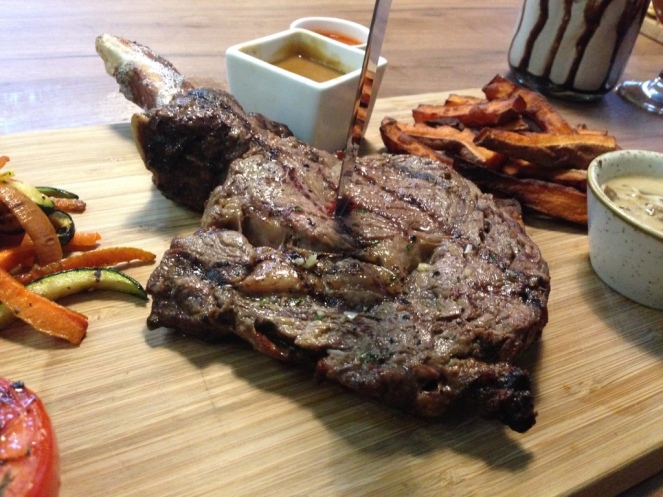 The “Mixed Grill” was ordered next and consisted of lamb chops, chicken breast, sirloin steak, beef sausage and buffalo wings; and upon arrival was visually and aromatically captivating. The lamb chops we found were cooked unevenly, as certain segments of the meat were too salty and over cooked, while other parts of the meat were succulent and pink, and seasoned divinely. The sirloin steak was unfortunately over cooked and therefore tough and chewy, and once again the seasoning was uneven. The chicken breast was too dry, but seasoned well and was gratifying in taste; nonetheless the dryness of the chicken diminished the enjoyment of the dish. The buffalo wings tasted slightly honey glazed, and while pleasing to the tastebuds, were regrettably not a memorable dish. Finally the beef sausages were herby in flavour, and juicy and succulent, but it lacked seasoning and therefore were a slight disappointment.

The dish to follow next was the “Lamb Ribs” bathed in special BBQ sauce. The ribs were cooked to perfection, with the meat tearing off the bone effortlessly. The meat was so supple, tender and succulent, that even the bones were so soft that they were starting to dissolve. The BBQ sauce was sweet and sticky, with a hint of spice that cut through the sweetness, adding a further dimension to the taste, which made the dish saporously addictive. Again another great dish worth ordering. 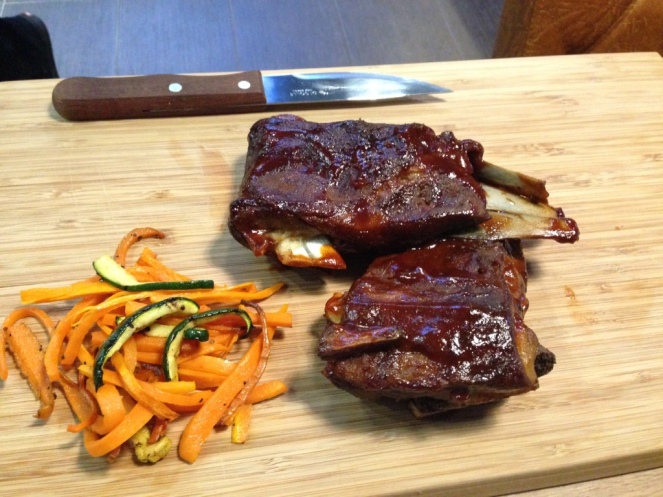 We also ordered “Half a Grilled Chicken” with the leg portion of the chicken marinated in lemon and herb and the breast portion marinated in medium hot sauce. The chicken leg was cooked well, lovely and moist, but the lemon and herb taste was not evident, and only the slight taste of the grill was present. The chicken breast fared better in taste, as the medium hot sauce provided a good level of piquancy, but unfortunately the breast suffered from dehydration, which abated the enjoyment of the dish.

We finally moved onto the Burger section of the menu where we selected one of Meat House London’s most popular burgers, the “Juicy Lucy”, which consisted of a 6 ounce beef patty that is hollowed out in the middle and filled with Monterey Jack cheese and topped with pulled beef. Once again, aromatically the burger was divine, and gastronomically the Juicy Lucy was simply heavenly. The patty was cooked medium, so the meat was still slightly pink inside, making it juicy, moist and scintillatingly supple in texture and it was scrumptiously seasoned to perfection. The pulled beef was lusciously succulent and tender, immersed in a combination of sweet BBQ sauce and majestic Asian spices, which gave the burger a phenomenal Asian twist. The taste sensation did not finish there. The patty then erupted like a volcano, with the cheese oozing out like lava and coating the mouth with creamy, gooey, warm cheese which brought ecstasy to the gustatory cells. The brioche burger was buttery and warm, and maintained the integrity of the burger successfully. This was one of the better burgers I have tasted to date, as each bite brought euphoria to my stomach. 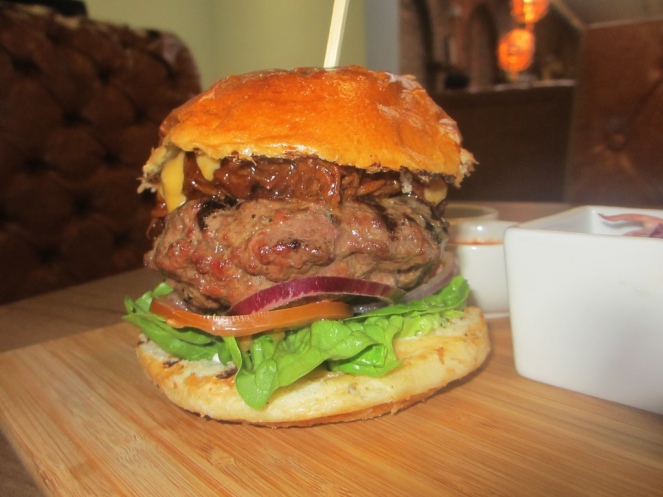 We also opted for a vegetarian option, the “Mushroom Halloumi” burger, which consisted of Portobello mushroom and halloumi. Truth be told, we were not expecting much from this burger, but we were gleefully surprised. The halloumi was grilled well, firm in texture and packed full of salty flavour, which married well with the meaty mushroom. Another dish we would recommend, whether you’re a carnivore or a herbivore.

It is evident that the owners of Meat House London are passionate about their food, which is translated into their desire to have something for everyone on their menu. In terms of the food, there were certain dishes that were not executed well and did not deliver successfully on taste. However, there were also dishes that were quite simply phenomenal and faultless, and were some of the best dishes we have enjoyed in a long time.

So whether you’re a meat lover, or just simply a lover of food, Follow Meat House London’s Halal Food Journey and discover the culinary delights that await you.

*We were invited to review.